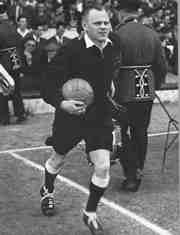 He first took up a teaching post in Devon but soon returned to Newport, Gwent. Benjamin Mervyn 'Sandy'
Griffiths began refereeing locally in1934. Within five seasons he was appointed to the Football League                   list as a linesman and, after the War, refereed the England versus Scotland clash in 1949, and then the 1953 FA Cup Final, otherwise known as the Matthews Final. It was his decision, with two minutes remaining, that enabled Stan Mortensen to equalise from a free-kick awarded just outside the penalty area.
Griffiths represented Wales at the 1950, 1954 and 1958 World Cup Finals. In the first of these he appeared in the opening fixture, and in the second took charge of the semi-final between Hungary and Uruguay, and assisting William Ling in the final.
In the closing minutes of the match, and with the score at 3-2 to the West Germans, Griffiths flagged Hungary's Ferenc Puskás  offside, just as he beat Toni Turek in the German goal.
He was the first Welshman to referee an international at Wembley, the first from his country to referee an FA Cup Final, and the only Welshman to appear in a World Cup final. Sandy was active internationally from 1949 until 1958. He ended his domestic career in 1959. In January 1974 Benjamin Mervyn Griffiths died at the age of 65. 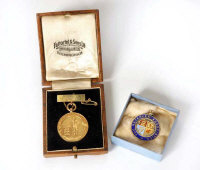 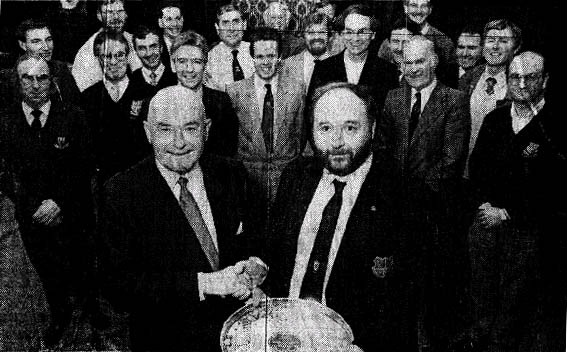