Interpretations of the Laws of the Game - Law 5.

The referee is authorised to stop play if, in his opinion,The  floodlights are inadequate.

If an object thrown by a spectator hits the referee or one of the assistant referees or a player or team
offi cial, the referee may allow the match to continue, suspend play or abandon the match depending on the severity of the incident. He must, in all cases, report the incident(s) to the appropriate authorities.

The referee has the power to show yellow or red cards during the half-time interval and after the match has
fi nished as well as during extra time and kicks from the penalty mark, since the match remains under his
jurisdiction at these times.

If a referee is temporarily incapacitated for any reason, play may continue under the supervision of the assistant referees until the ball next goes out of play.

If an extra ball, other object or animal enters the field of play during the match without interfering with play, the referee must have it removed at the earliest possible opportunity.

The referee may play advantage whenever an infringement or offence occurs.

The referee should consider the following circumstances in deciding whether to apply the advantage or stop play:

• the severity of the offence: if the infringement warrants an expulsion, the referee must stop play and send off the player unless there is a subsequent opportunity to score a goal.

• the position where the offence was committed: the closer to the opponent’s goal, the more effective it can be.

• the chances of an immediate, promising attack.

• the atmosphere of the match.

The decision to penalise the original offence must be taken within a few seconds.

If the offence warrants a caution, it must be issued at the next stoppage. However, unless there is a clear advantage, it is recommended that the referee stops play and cautions the player immediately. If the caution is NOT issued at
the next stoppage, it cannot be shown later.

The referee must adhere to the following procedure when dealing with injured players:

• play is allowed to continue until the ball is out of play if a player is, in the opinion of the referee, only slightly injured.

• play is stopped if, in the opinion of the referee, a player is seriously injured.

• after questioning the injured player, the referee may authorise one, or at most two doctors, to enter the fi eld
of play to assess the injury and arrange the player’s safe and swift removal from the field  of play.

• stretcher-bearers should only enter the field of play with a stretcher following a signal from the referee.

• the referee must ensure an injured player is safely removed from the field of play.

• a player is not allowed to receive treatment on the field of play.

• an injured player may only return to the field of play after the match has restarted.

• irrespective of whether the ball is in play or not, only the referee is authorised to allow an injured player to re-enter the field  of play.

• the referee may give permission for an injured player to return to the field of play if an assistant referee or the fourth official verifies that the player is ready.

• the referee must allow for the full amount of time lost through injury to be played at the end of each period of play.

Exceptions to this ruling are to be made only when:

• a goalkeeper is injured.

• a goalkeeper and an out field  player have collided and need immediate attention.

• players from the same team have collided and need immediate attention.

More than one offence occurring at the same time.

• Offences committed by two players from the same team:

– the referee must punish the most serious offence when players commit more than one offence at the same time.

– play must be restarted according to the most serious offence committed

Positioning with ball in play.

• The play should be between the referee and the lead assistant referee.

• Staying towards the outside of the play makes it easier to keep play and the lead assistant referee within the referee’s  field of vision.

• The referee should be close enough to see play without  interfering with play.

• “What needs to be seen” is not always in the vicinity of the ball. The referee should also pay attention to:

– possible offences in the area towards which play is  heading.

– offences occurring after the ball is played away.

Positioning in ball out of play situations.

The best position is one from which the referee can make the right decision. All recommendations about positioning are based on probabilities and must be adjusted using specific information about the teams, the players and events in
the match up to that point.

The positions suggested in the following graphics are basic and  recommended to referees. The reference to a “zone” is intended to emphasise that every recommended position is actually an area within which the referee is most likely to optimise his effectiveness. The zone may be larger, smaller or differently shaped depending on circumstances at the moment in question. 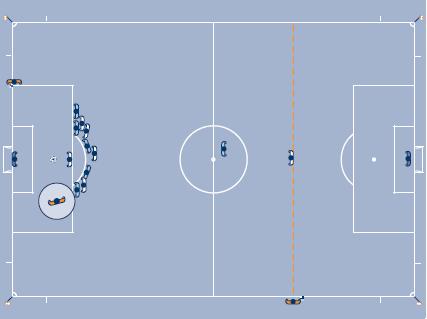 Position for a Penalty Kick 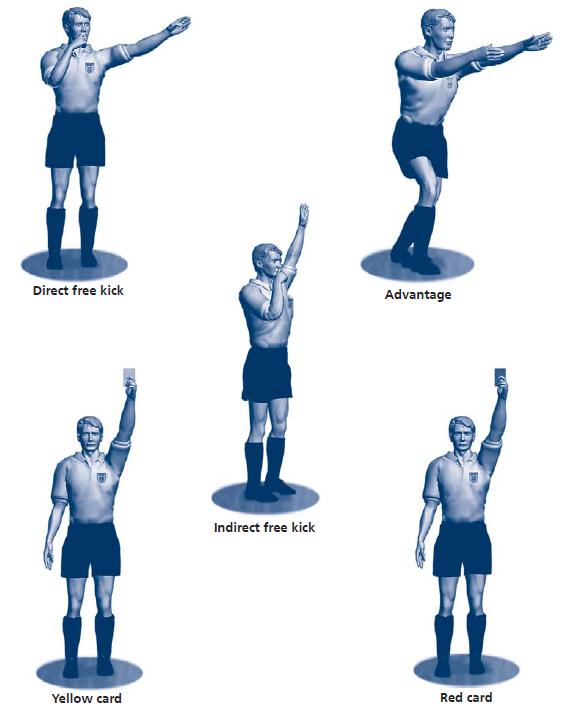 Referee Signals
Use of whistle.

The whistle is needed to:

• stop play:
– for a free kick or penalty kick.
– if the match is suspended or abandoned.
– when a period of play has ended due to the expiration of  time.

• restart play for:
– free kicks when the appropriate distance is required.
– penalty kicks.

• restart play after it has been stopped due to:
– the issue of a yellow or red card for misconduct.
– injury.
– substitution.

A whistle which is used too frequently unnecessarily will have less impact when it is needed. When a discretionary whistle is needed to start play, the referee should clearly announce to the players that the restart may not occur until after that signal.

Body language is a tool that the referee uses to:
• help him control the match.
• show authority and self-control.

Body language is not:
• an explanation of a decision.


The additional assistant referees help the referee to control the match in accordance with the Laws of the Game. They also assist the referee in all other matters involving the running of the match at the request and
direction of the referee. This commonly includes such matters
as:
• inspecting the field, the balls used and players’ equipment.

• determining if problems with equipment or bleeding have been resolved.

1. General positioning during the match.

The additional assistant referees’ position is behind the goal line.

The additional assistant referees are not allowed to enter the field of play. unless there are exceptional circumstances.

4. Kicks from the penalty mark

The additional assistant referees must be positioned at each intersection of the goal line and the goal area, to the right and left of the goal respectively.

The additional assistant referees are responsible for indicating to the referee when the whole of the ball has passed over the goal line, between the goalposts and under the crossbar.

The additional assistant referee must communicate to the referee when a goal has been scored.

The additional assistant referees will use a radio communication system only and not flags to communicate decisions to the referee.

In the event of a breakdown of the radio communication system, the additional assistant referees will use an electronic signal beep flagstick to indicate their decisions.

As a general rule, the additional assistant referee must not give obvious hand signals. However, in some instances, a discreet hand signal may give valuable support to the referee. The hand signal should have a clear meaning. The
meaning should have been discussed and agreed upon in the pre-match discussion.