Interpretations of the Laws of the Game Law 14

Feinting in the run-up to take a penalty kick to confuse  opponents is permitted as part of football. However, feinting to kick the ball once the player has completed his run-up is considered an infringement of Law 14 and an act of  unsporting behaviour for which the player must be cautioned.

Preparing for the penalty kick:

The referee must confirm the following requirements before the penalty kick is taken:

•  The kicker is identified.
•  The ball is properly placed on the penalty mark.
•  The goalkeeper is on the goal line between the goalposts and facing the Kicker.
•  The team-mates of the kicker and the goalkeeper are:

Infringements – after the whistle and before the ball is in play. 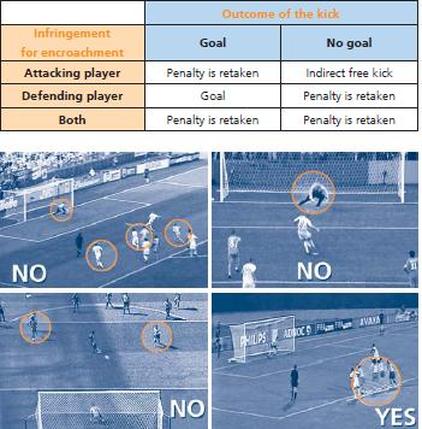